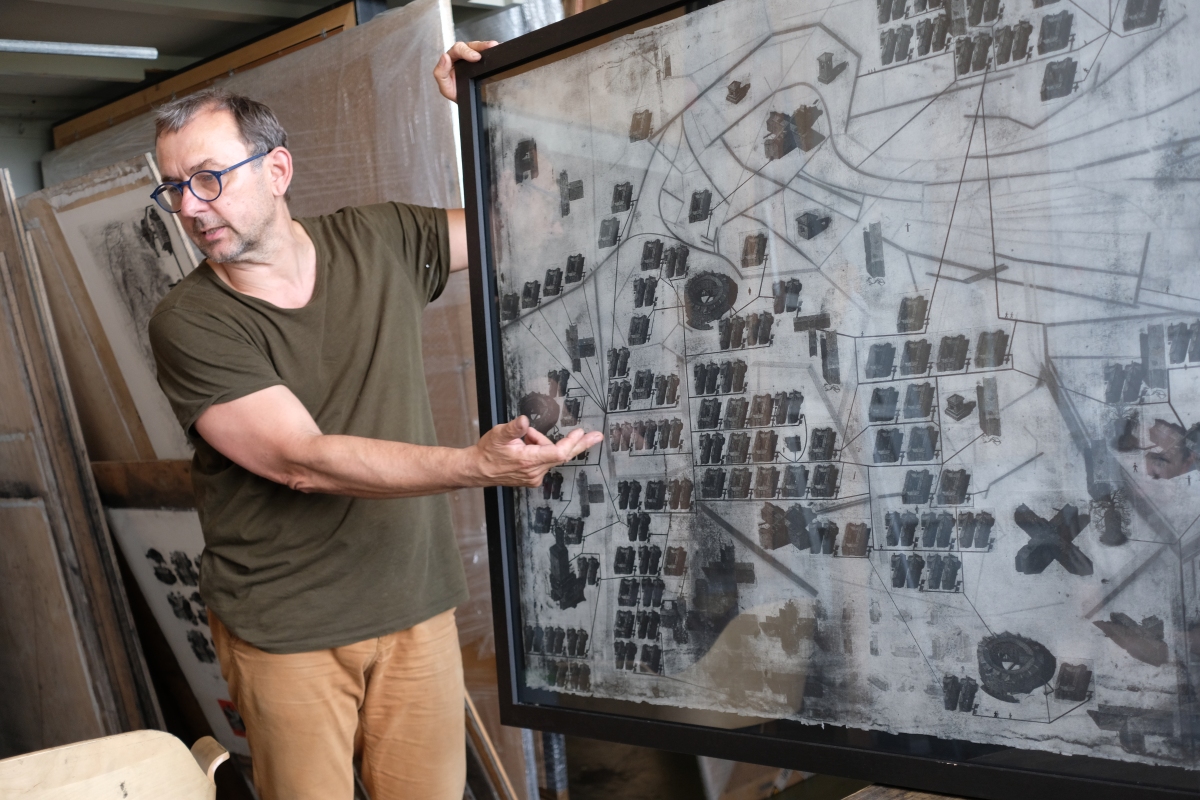 “The air outside has become unbreathable. Smoke, dust and the smell of burning.” These words are uttered by Pavlo Makov, 63 years old, the artist chosen to represent Ukraine at the next Venice Biennale. We contacted him by phone at the Yermilov Center, a space in the basement of Kharkiv State University, which in recent years has been used for contemporary art exhibitions. It is there that he and other artists and their families are taking refuge from the bombings of the Russian troops. Their internet connection is not good; it often breaks up and so the dialogue moves to Telegram. He promises us that he will respond soon, “Not now, though, because I’m getting very little sleep.”

He spent the night between Thursday and Friday, when he was still in his home, standing guard so he could wake up his wife, son, daughter-in-law and 92-year-old mother to the sound of sirens “What are my feelings in these hours? Very different. They depend on the situation, on the news we receive. But what prevails is the pride of being a Ukrainian citizen. I always have been, even though I was born in St. Petersburg to a Russian family. But now more than ever do I feel a Ukrainian citizen. In a different situation, such a statement would have sounded pathetic, but today it is not at all.” We ask him what has been, so far, the most difficult circumstance. He answers that it was not the first siren or the first explosion, but the period of uncertainty that preceded the attack. “The Russian invasion has been going on for eight years already. The scale of conflict has now simply changed. For those who live here it was already evident; those of you in Europe struggled to see it. Now it is before everyone’s eyes. But we reached this moment ready. I am not able to shoot, I am not trained. There are those who will do it for me, better than me. But the people here are ready to resist, everyone will do everything they can.”

Yesterday, Makov and the three curators of the Ukraine Pavilion, Lizaveta German, Borys Filonenko and Maria Lankro, released a statement saying, “We absolutely support the statement of La Biennale di Venezia that international exhibits are platforms for collaboration and dialogue.” They note, however, that despite having received solidarity and offers of help from many of the Biennale participants, no message has come “from the Russian artists or commissioners of the pavilion whose army is currently bombing us and forcing us into shelters or exile.” The only person to contact them was Russia’s curator, Lithuanian Raimundas Malašauskas, who resigned from his post on Sunday. “We believe that dialogue is about two-way communication, not an imposed agenda. That’s why we don’t believe Russia should be part of La Biennale.”

For Makov, participation in the Biennale is not just an opportunity to make his work known to the art world: “We will be like the eyes of our country which everyone will be able to look into. We will offer our gaze and, whoever wants to, will be able to better understand not only who we are as artists and curators, but also what Ukraine is. We are an independent country, a young state. It would also have been an opportunity to dispel the silly myths that we have been carrying around since the Soviet period. But now, since the day of the attack, these myths have already been largely swept away. But at what price?”

The Kharkiv-based artist plans to exhibit a reworking of an old project he conceived in the early 1990s at the Biennale, entitled “Fountain of Exhaustion.” It is a pyramid of 78 bronze funnels with two blowpipes each. Water is poured into the funnel at the top and, dripping into those placed below, gradually seperates itself until it reaches the pyramidal base in the form of water droplets. The work is inspired by the crumbling infrastructure characteristic of post-Soviet cities, in the aftermath of the collapse of the USSR. The water supply was precarious at that time and none of the public fountains worked in Kharkiv, where the artist has lived for almost forty years. Once, he recounts, an accident at the local purification plant caused flooding and a four-week interruption in water distribution. It is a work conceived three decades ago, but which touches on very topical themes, the curators explain: “The work aims to denounce not only the depletion of natural resources, but also post-pandemic burnout, the exhaustion caused in people by social media, and the exhaustion of populations caused by wars.” Makov’s fountain is a metaphor of how the lifeblood of man or nature is wasted because of inhuman structures, choices or logic.

The work planned for Venice, however, differs from Makov’s usual way of expressing himself, who first trained as an engraver. The artist usually creates printed works using two or more small matrices, produced using the technique of etching, whose design is imprinted, successively, on different areas of the same sheet. The result is sometimes very complex compositions. While traditional printing uses the matrix of an image to print several copies of the same work, here the process leads to the creation of unique pieces that the artist can then add to using pencils, inks and other materials.

In a corner of his studio, on the third floor of the Soviet building still owned by the Union of Ukrainian Artists (without which, during the regime, it was not possible to practice any creative activity) there is the desk where the artist works on the matrices with the burin, with the help of a magnifying glass. Next to it, occupying most of the space, is the large press with which he makes his works. The matrices depict trees, plants or buildings, with which Makov composes landscapes or maps of real or imaginary cities.

In recent years, the Kharkiv artist has returned several times to the theme of war. Such is the case with the artist’s book “Donrosa. Diary of a Ukrainian rose garden”, a tribute to the city of Donestk, in the Donbas. The book is inspired by the drawings and notes of a rose enthusiast from Kharkiv who, between 2008 and 2010, recreated a garden in the Russian-speaking city that was designed in the 19th century and said to have been conceived by English landscape architects on the model of a Dantean circle. “Donrosa”, a cross between the words “Donetsk” and “rose”, opens with the verses of Canto III of Hell: “Here all suspicion needs must be abandoned, / all cowardice must needs be here extinct/ We to the place have come, where I have told thee / thou shalt behold the people dolorous / who have foregone the good of intellect.” The garden is seen as a labyrinth with a central plan, composed of hundreds of rose bushes, printed one by one on the same sheet. The work was then divided into sections and paginated in a small volume of which one thousand copies were printed. It is an imaginary place where beauty, pain and madness coexist. The image of a city at war.

In a prophetic work, entitled “Dorothea. Siege of Kharkiv” and made between 2015 and 2016, Pavlo Makov reproduces with some accuracy the plan of the city. Different types of buildings are repeated, creating the texture of the streets. You can recognize the main square in the bottom left, highlighted in red pencil, where you see the silhouettes of military convoys. Smoke rises from the chimneys of many houses. It looks like an ancient document, worn out by time. Instead, it is a work that speaks of a near future that has turned into a tragic present.

The first time the writer visited Makov in his studio was in the summer of 2016. On his desk was a copy of the Italian edition of “Invisible Cities” by Italo Calvino. At one point the artist opened the volume and read the last page in his Russian accent: “The hell of the living is not something that will be: if there is one, it is what is already here, the hell where we live every day, that we form by being together. There are two ways to escape suffering it. The first is easy for many: accepting the hell and become such a part of it that you can longer see it. The second is risky and demands constant vigilance and apprehension: seek and learn to recognize who and what, in the midst of hell, is not hell, then make them endure, give them space.” He looked up and added, “There, that’s what I’m trying to do. And that many in Ukraine are trying to do today.”