Borello, Cannuzzo, Gambellara, Forlimpopoli, Macerone, Martorano, Meldola, Montaletto, Metellica, Sorrivoli, Piavola, San Giorgio, San Martino, San Vittore. This rosary of locations along the via Emilia is comprised of villages not dissimilar to Ronta, in the municipality of Cesena, where Guido Guidi lives. Of the masters of Italian photography, notably the generation of Gabriele Basilico, Giovanni Chiaramonte, Mario Cresci, Luigi Ghirri and Olivo Barbieri, Guidi (class of 1941) has travelled the least distance to find what he has been seeking for 50 years.

It is not obvious what he is seeking, this man who speaks and photographs a little like a medieval pilgrim, or a Buddhist monk. At a 2014 retrospective exhibition at the Fondation Henri Cartier-Bresson in Paris, the curator Agnès Sire described him as an artist who wishes to “shed light on a changing reality that we do not wish to see, where we think there is nothing to be seen”. For his part, Guidi loves to quote a phrase from the Talmud whenever he can: “Wherever you look, there is something to see”. Elevating his discipline to a lay religion, he adds: “For me, taking photographs is an act of devotion”. 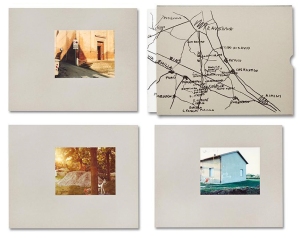 His latest book, released in September by Mack and already sold out, is titled “Per Strada”, and collates the fruits of his wanderings between Rimini and Ravenna in the 80s and 90s. 285 photographs, almost all in colour, divided into three volumes. Unknown villages, worn gates, broken walls, side streets, road signs, shabby town cars, street lamps. Guidi tells us that one day, he showed these images in Bologna to a group of architects from Emilia Romagna: “The then President of the Regional Association of Architects spoke, saying that he was unsettled by seeing my images. He stated that I photographed with great care objects and buildings that he would have pulled down”.

Some photographers head out after having studied maps of the local area, like urban planners. Guidi smiles, saying that for him, the via Emilia is a road like any other: “My journey started in my own neighbourhood, near my home. The via Emilia is a road that takes you from one place to another. It was not the only road I travelled on: I also shot on the Romea and the B.1, from Russia to Santiago de Compostela. I leave my home and my map is the road itself. I follow it and see where it takes me. Even when I worked with urban planners I would happen to deviate, to go outside the set route. What is important to me is travelling, and seeing what I come across. And discovering. Discovering oneself. To get to know more, to grow richer. To learn to be less afraid of the unknown”. Guidi, to explain his attitude towards the things he sees, quotes Ezio Raimondi, the great philologist, who wrote that the experience of reading should be that of the pilgrim, not that of the tourist.

What is striking in Guidi’s choice of subjects and method of shooting is the absence of rhetoric: “This is to do with the fact that it was photography that chose me, in a sense. I did not choose; I was attracted by this discipline. As a child, I liked to draw; then, at university, I came across a book by Siegfried Kracauer, “The Theory of Film: The Redemption of Physical Reality”, which analysed the difference between cinema and theatre. In cinema, as in photography, there is no need for emphasis to simulate reality. In fact, this is damaging. I do not seek rhetoric; I attempt to return to a zero degree, to what Roland Barthes called “intractable reality”.

The theologians of the High Middle Ages who dictated guidelines to painters, Guidi explains, maintained that figures of saints should not “represent” real people, but should “present” them. In Piero della Francesca, a peasant must appear as such to the viewer. Thus we find ourselves in front of the ‘peasant’, of “Sigismund Malatesta”, or the “Madonna” who is, first and foremost, a woman. They are, first and foremost, real people; then they are also metaphors. They are presented to us like concrete apparitions.

Guidi’s images may initially appear to a superficial viewer as snapshots of insignificant locations, taken without any sort of “technique”, or, to put it badly, without any “artistry”. This is not at all the case. For almost 40 years now, the photographer from Ronta has carried around a heavy large format camera which produces 20x25cm negatives, which he prints without enlarging them. It is a precise poetic choice, just as significant as focusing on locations far from historic centres, void of any “monumental dignity”, as he puts it. He seeks that free zone where man has built spontaneously, where urban language would be seen as a “peripheral, vulgar dialect”. The photographer tells of the time he attended a conference by the poet Franco Fortini: “He said that only by writing a poem in dialect can one talk about bread without falling into rhetoric. Dante used the vulgar, not Latin. Is that nothing? Thus, in contrast to painting, sculpture, or architecture, which are courtly languages, photography is a vulgar language. If I place a piece of paper with a photograph on it in front of your eyes, you will have an object in front of you which elicits far less reverence than an oil painting. Walker Evans said that for those who know, there is a particular pleasure in using a language disregarded by the majority”.

For Guidi, the focus is a way of looking at the world. “We must be cultured, provided that visual culture does not make our eyes too combative. A combative gaze is negative.” It is necessary, he argues, to rediscover a simple approach to seeing things, to deconstructing an image, to reading an image. “But one cannot deconstruct without culture. I do not believe in a naïve attitude, or the presumption of those who claim they were never taught. Beato Angelico was a cultured man; he lived in the library of the San Marco Convent, which was full of ancient volumes. As well as reading, one must learn to ‘see’. Yet no one teaches this. As children, we are told that, before crossing the road, we must look left and right. But then our mother tells us: “Don’t look around, walk!”. Or: “Don’t stare, its rude.” This is all the opposite of what we should do. Barthes, in an open letter to Michelangelo Antonioni, defined the ‘insistence of the gaze’ as one of the virtues of the artist”.

Guido Guidi’s journey began long ago. At the end of the 70s, in the halls of the Industrial Design course at the University of Venice, he met masters such as Italo Zannier and Carlo Scarpa. With Zannier, he recalls, “I carried out very precise exercises with a camera on a tripod; exercises that would then have been dubbed in some way “conceptual”, or even “minimalist”, based on their methodical repetition. For instance, we photographed an object from two metres, three metres, four metres, and so on. We then mounted the photographs onto panels, creating series”. In Laguna, a few years prior, in 1964, Pop Art had arrived. His favourite artist from that time is Jasper Jones, but he admits, more or less directly, to having been influenced by many others.

In 1984 Luigi Ghirri includes Guidi, with his images from the preceding decade, into the group of artists selected for the project “Viaggio in Italia”. In the same year, they embark on a project together: “Two photographs for the Teatro Bonci”, some photos of which re-emerge in “Per Strada”. Yet his work, and that of the other photographers of his generation, offered something undeniably new, and different to what Italian photography had produced until then. It created unease. “They said to us: ‘You want to be American’. This was because we photographed ‘stuff of vagabonds’ [‘robe da barbun’], as Jannacci would say, or ‘cose da nulla’ [nothingness], as Pasolini would call them.”

“I never managed, or never wanted to, use irony”, Guidi explains, returning to the register of his lay religion: “If photographing is like praying, how can I be ironic?”. Irony is often used in photography, mocking the form of the photo card which, according to Guidi, appeals as much to the ordinary people as the intellectual. In this sense, from an editorial perspective, a book by an author toying with the form of the photo card certainly has more commercial appeal. “But the risk is that you end up mocking everything. I instead use photography like a prosthesis, like the blind man’s cane mentioned by Descartes: an instrument with which to engage in a relationship with reality, with which to touch it. For me, art is a method of getting to know the world. I am thus not able to introduce irony in the mediums which enable me in this difficult adventure”.

The images in “Per Strada” are for Guidi the training ground for embarking on this adventure, which he defines as the attempt to “render things present”. An aim which, he admits, is difficult, if not impossible, to carry out with verbal language. “It would not just be the use of the word ‘sea’, but the fact that, in the act of reading, I find myself in the presence of the sea, or a person, or a thing. Few manage this”. Here he quotes Carlo Emilia Gadda in “Il Castello di Udine [The Castle of Udine]”: “He was a maths student, and we became friends: a fragile and dry friendship, in the moral chill of despair, like those flowers, glassy feather, which dissolve with a breath”. Guidi comments: “Reading this, I find myself in the presence not only of the flowers, but also of life. It is not only the flower, but also the feather, that the breath dissolves. In photography or painting, as Leonardo said, we cannot depict wind if not through clouds in motion. Rendering a visible presence, rendering a house, the curbstone, a tree, and at the same time the wind…”

Regarding this attempt to return to reality, Guidi concludes that Susan Sontag was right when she wrote: “Between two fantasy alternatives, that of Holbein the Younger, who lived long enough to have painted Shakespeare or that of a prototype of the camera which had been invented early enough to have photographed him, most “Bardolators” would choose the photograph. This is not because it would presumably show what Shakespeare really looked like, for even if the hypothetical photograph were faded, barely legible, a brownish shadow, we would probably still prefer it to another glorious Holbein. Having a photograph of Shakespeare would be like having a nail from the True Cross.”